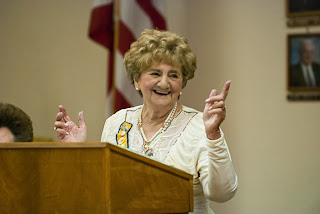 One of Aleli Parlor’s spunkiest sisters, Lucy Cornelius, passed away on Wednesday, November 20, 2013. She was born November 4, 1921, in San Martin and joined Native Daughters of the Golden West on March 25, 1993.  As a member of Aleli Parlor in Salinas, she served on various committees and held many offices, including President and Past President, over her more than 20 year tenure.  Her memorial service was held on November 30, 2013 and was attended by many people, old and young alike...truly a testament to how Lucy's spirit transcended generations.

She met and married her partner and best friend, George Melvin Cornelius on December 14, 1940 and for the next 62 years enjoyed spending time with their family, both on trips and in their second home in South Lake Tahoe creating many happy memories with their children, grandchildren, and great-grandchildren.

Lucy was always very active in her communities and church.  She was a member of the Saint Paul's Episcopal Church of Salinas and actively involved in the Women's group, Episcopal Church Women. She was also a founding member of the Mothers Club of North Monterey County along with 14 other mothers.  In Lucy's free time she enjoyed playing bingo at the Firehouse Senior Center, playing Bunco with her friends and spending time with her family.

Lucy was spunky, positive, upbeat and always smiling. She always made time for those who needed her. She visited friends when they were ill, sent hand written notes to her family and friends just to let them know she was thinking about them or to send them a positive word.  She enjoyed watching her grandbabies, seeing them grow, encouraging them, and teaching them all so many things.

Lucy was preceded in death by her son, George (Sonny) Cornelius; her daughter, Antoinette Joyce Dowdy; her husband of 62 years, George Melvin Cornelius and her two sisters and four brothers.